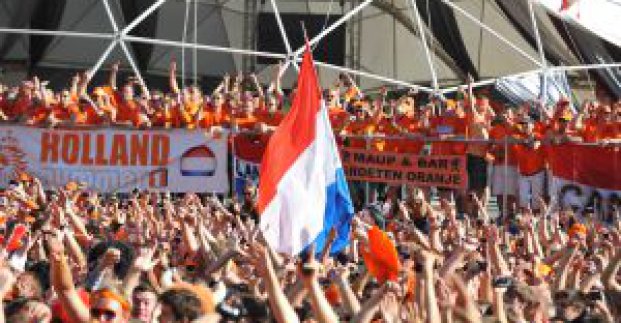 European Football championship 2012 taught Kharkovites to support a team in cultivated manner.
Oleksandr Popov, the deputy of city mayor in UEFA EURO 2012 preparations informed about it in a programme «Objective - view point» on «Simon» channel.
He emphasized that the culture of supporting a team Kharkiv citizens obtained from foreign fans who were in the city during UEFA EURO 2012.
«Despite the guests were merry their behavior was polite. I also want to mark how decently  Dutch accepted the defeat of their team. It appears that one can root without the fights and fires. Ukrainians followed their example and behaved deserving in the fan-zone while the match with Ukrainian national team. It happened that there were about 50 thousand people in the fan-zone at a time. Nevertheless there were no incidents and in the end of the match fans left the territory within 5 minutes. I was impressed with the discipline of our fans», - Oleksandr Popov marked.
He emphasized that Kharkiv got united during the UEFA EURO 2012. They helped foreigners, had fun together with them, supported them and their national team. Before each match of Holland national team the government of the city welcomed foreign fans on Svobody square.
According to the words of the deputy mayor – fan-zone as well as other objects of UEFA EURO 2012 were organized on the highest level. City authorities accomplished all the requirements of the UEFA.
Oleksandr Popov specified that parking lots and hotels were not full. The UEFA had overestimated the number of places in hotels and they refused the number of reservations.
According to the words of the deputy of city mayor the prices of the hotels were affordable. Having come to Kharkiv, fans came across with a fair number of the hotels and a good service.
Oleksandr Popov also added that it is possible for Kharkiv to host European Basketball championship in 3 years. What will probably make kharkovites love one more kind of sport.