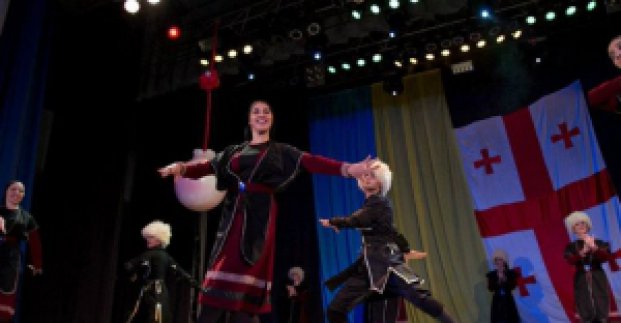 The 5th All Ukrainian festival of Georgian culture "Unity is born in friendship" was held on May, 25  in Kharkiv.
The festival was dedicated to the 22nd anniversary of state independence restoration of Georgia.
The opening ceremony was attended by the Ambassador Extraordinary & Plenipotentiary of Georgia in Ukraine Michael Ukleb, the president of public organization "United Georgia" Tamaz Tedoradze, the president of All Ukrainian association of Georgian communities Merab Gabriadze, representatives of Kharkiv city council and regional state administration.
The Ambassador of Georgia in Ukraine congratulated all present with the Independence Day of Georgia and thanked for the participation in the festival which contributes the maintenance and evolution of Georgian culture and traditions.
The festival was attended by song and dance companies of national associations from Kharkov, Kiev, Lugansk and Odessa.