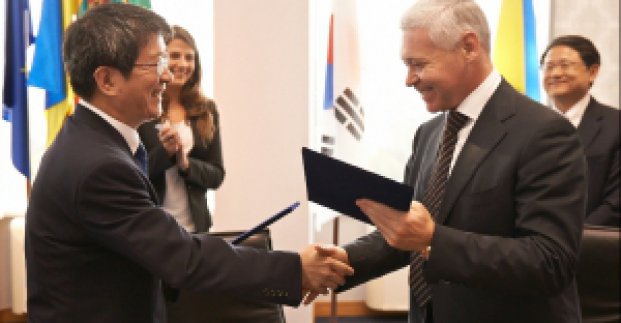 The Agreement on the establishment of a partnership between Kharkiv and Daejeon (South Korea) was signed today, August 23.
From the side of Kharkiv the agreement was signed by Igor Terekhov, the deputy mayor in questions of development and maintenance of the city and by Bong Chang, the Vice-Mayor for Administration of Daejeon.

The agreement has formalised the intentions of the cities to establish fruitful bilateral cooperation. According to the document, Kharkiv and Daejeon will cooperate in cultural, technological, scientific, commercial, cultural, health, sports and other fields.

"I am glad that I can pursue negotiations with you here. It is a great honor for me, as your city was the first capital of Ukraine, and it is the highest level of negotiations. I know that our cities are very similar, we also pay great attention to science. Hopefully, we share our experience of doing business in many industries. I want our cities to develop for the benefit of two countries ", - Bong Chang said.

The delegation of Daejeon officially invited Kharkiv to visit traditional Korean food and wine festival, where they will discuss further cooperation.

The first contacts of Kharkiv with Daejeon developed after the partnership with Novosibirsk (Russian Federation) in 2011. The city leaders of Daejeon took an interested in cooperation with Kharkiv and their first visit to the city was on April 2012 within the framework of international tourism forum "Kharkiv: partnership in tourism". The official meeting with the leadership of Kharkiv was held at that period as well as the determination of main directions and prospects of cooperation.

All in all Kharkiv has 27 partner cities.

18 January 17:02
Kharkiv and Genoa are planning to cooperate in the field of economy and education
Tags: cooperation, Genoa, partnership
Latest News
more news