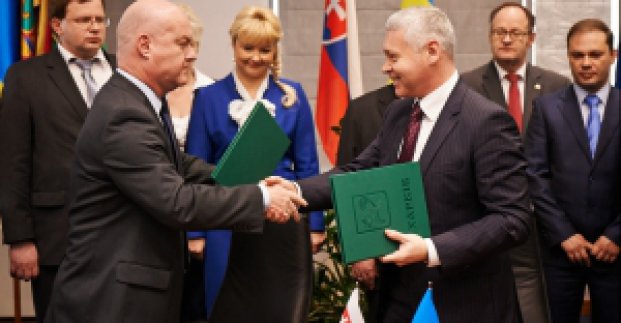 Kharkiv and Trnava(Slovakia) signed Partnership Agreement on April, 19.
The document was signed by Igor Terekhov - the deputy of Kharkiv mayor in questions of development and maintenance of the city and vice-mayor of Trnava  - Bystryk Stanko.
According to the agreement cities will develop cooperation in the field of culture, education, sports, tourism, trade and other fields of social and economic life. Also Kharkiv and Trnava plan to contribute development of mutually profitable trade and business activities, held cultural, educational and sporting events, run exchange of students etc.
"Kharkiv rapidly develops municipal cooperation with 25 cities from 17 countries of the world. Today we make one more step to expand international contacts of Kharkiv. We sign partnership agreement with Trnava. I am convinced it will be mutually profitable cooperation and we will implement common projects for the benefit of our citizens, for the benefit of Ukraine and Slovakia," - Igor Terekhov said.
In his turn Bystryk Stanko noticed that Kharkiv will become the 8th twin city of Trnava. “Our city is not very big but smaller cities are also able to have solid experience that can be shared. And Kharkiv will be our elder brother in it. We have common problems and interests that is why I am sure we will find common ground. We would like to cooperate not only in economic direction but in fields of culture and education,” - Trnava vice-mayor informed.
He also told that he had visited Kharkiv two years ago and the city had considerably changed for the better. In particular, Bystryk Stanko marked quality improvement of the roads and amenities as a whole, as well as new recreational facilities in Gorky park.
The signing ceremony was also attended by the chancellor of Slovak Republic in Ukraine – Pavel Khrobak, delegations of foreign twin cities and partner participants of VI International Tourism Forum “Kharkiv: tourism partnership”.
Note. Agreement for good-neighborliness, friendly relations and co-operation between Ukraine and Slovak Republic was signed on June, 29 in 1993. Cooperative agreement between Kharkiv regional state administration and Trnava autonomous krai has been in force since June, 17 of 2011.

18 January 17:02
Kharkiv and Genoa are planning to cooperate in the field of economy and education
Tags: cooperation, Genoa, partnership