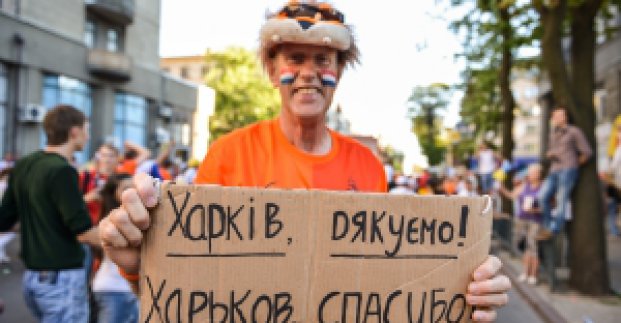 This year was special for Kharkiv because of Euro-2012.
Initially, our city was not the hosting one. However, the rapid development of infrastructure and the enormous work that Kharkiv performed in anticipation of the tournament, convinced the UEFA to carry three group stage match in our city.
One may say that the European Championship has approached the changes that were necessary for the city. First of all it is about transport infrastructure that fully coped with the influx of foreign visitors. 140 trams, trolleybuses and buses were purchased for Euro-2012. In addition, the city reconstructed tram crossings and stops. All this will benefit Kharkiv citizens for more than one year.
Developed European city is inconceivable without modern airport. New terminal that meets all the necessary requirements was opened before Euro-2012. The fact that from the beginning of the year the gateway of the city accepted almost 400 thousand people shows that reconstruction of Kharkiv airport was needed.
The city managed with the arrangement of guests, fans and VIP delegations. For the most numerous representation of fans from the Netherlands was built Orange Camp in Zhuravlevskij hydro park. More than 20 objects were involved to place the fans. Mostly these were student dormitories, hotels, hostels.
We can’t but mark the reconstruction of "Metalist" complex and of training grounds. New facilities completely satisfied all the requirements of UEFA, and the world's best players and teams noted the high level of organization of the matches.
Except for these important aspects of preparation for the championship, the city took into account dozens of small nuances in the questions of comfort of every fan. Kharkiv developed special tourist routes for fans, printed maps and information booklets, which helped guests navigate in unfamiliar city. Great efforts were invested to teach service workers the basics of English language.
Volunteers performed enormous job during the championship. Tourists and fans were able to receive help from 1200 volunteers who worked on 12 objects of Euro-2012. All the volunteers underwent the training of English language, first aid treatment, the history of Kharkiv and European championships. Besides, Kharkiv opened International volunteer camp where young people from Kharkiv twin cities came. It should be noted that Kharkiv became the only city in Ukraine that implemented such a project in the sphere of partener and twin-city relations.
During large-scale tournaments that are notable by a large influx of visitors, the number of thievery and fraud increases. However Kharkiv manged to reduce the crime rate in the city during Euro-2012. Right for the championship the city created Regional Interagency Coordinating
office that monitored the safety and public tranquility in the city.
Kharkiv also managed to solve the main task - to ensure the comfort and safety of every fan. Michel Platini, the UEFA president expressed a high opinion and marked that "the quality of provided services, contribution of city authorities and all its staff, kindness and hospitality of the citizens and high performance of arrangements contributed successfull hosting of the Euro-2012 championship".
However, the main proof of the success of the city became sincere gratitude of the fans, for whom the level of infrastructure, hospitality and beauty of the city has become a true revelation.