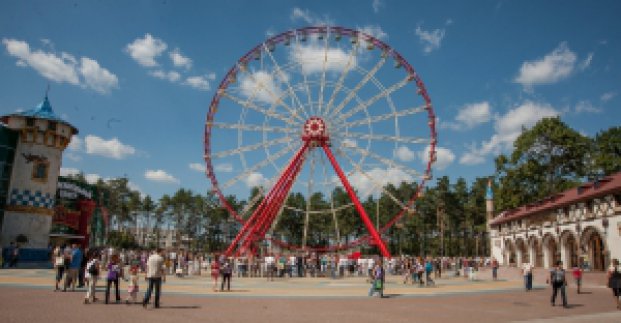 Kharkiv has always ranked among the most comfortable cities of Ukraine. In recent years,  a lot of work has been done on restoration of parks and gardens, repairing of monuments, street lighting and houses.
In 2012 in Kharkiv were remodeled 10 leisure areas, including the opening of renovated Gorky park. It has been landscaped for years, but now citizens and guests of the city can relax in one of the best parks of its kind in the CIS. During the reconstruction the alleys were cleared, new benches and lights were installed, modern recreational facilities were bought. Gorky park has become an attractive place for tourists, where people come even from neighboring countries.
In addition, Constitution square is also being rebuilt in the city. The most important event was held in summer - Independence monument and adjoining territory was landscaped. The reconstruction of the Historical Museum still continues. According to the project, all the territory of the Constitution square will meet the changes. The main goal is to change the red color to more diluted gray and golden hues, and give the city center a single style.
For the last few months Kharkiv has become brighter, not only in the streets and neighborhoods but near schools, nurseries and hospitals. Now, the lighting level of Kharkiv is 86.6%, what is 2.6% higher than at the beginning of the year. For the record of the energy multirate meters are used, what allowed to save for around 150 thousand UAH on outdoor lighting in 2012.
In anticipation of winter, the condition of heating systems and preparation for the heating season was the most important issue. Now Kharkiv refits and renews the entire system in order to reduce energy consumption and, at the same time provide high quality services. For this communal enterprises invested about 50 million of their own funds in infrastructure in 2012. As a result, the heating season started on time and there were no problems with the heating systems. Also, the mayor Gennadiy Kernes stated that the service of heating won’t become more expensive.
The support of veterans and the "children of war" has become an important area of work of communal enterprises. So, they receive free installation and maintenance of water meters from "Kharkivvodokanal". The enterprise has already accomplished more than 3 thousand of applications from Kharkiv benefit holders. In particular, communal enterprises “Ritual” and “Zapovit” provide free burial of veterans and their family members.
The monuments were of the Great Patriotic War and the military burials are also being restored in the city. This year basic repair of the monument to Marshal Zhukov and the surrounding was held. Overall, 20 monuments were reconstructed to the Victory Day this year.
As the city mayor Gennadiy Kernes repeatedly stated the improvements should be carried throughout the year. Now there is no even a single day without changes, even the most insignificant, but a change for the better is made each day. This is the only way to ensure that Kharkiv gets more convenient, beautiful and safe, not only for citizens but for the guests of the city as well.