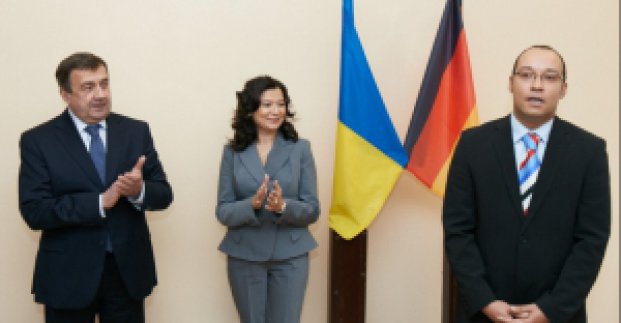 First Ukrainian and German academic centre in Kharkiv was opened on November, 2 in V.N. Karazin Kharkiv National University.
Tatiana Gavrish, honorary consul of Germany in Kharkiv; Vil’ Bakirov, the rector of Karazin University; Dmitriy Kol’chik, the director of the centre took part in the opening.
According to the management of the centre, the idea on the creation of it was maintained by German consulate general in Donetsk and consulate general in Kharkiv. Main tasks of the centre will be profound linguistic skill; implementing of two-way projects in the sphere of academic exchange, common education programs, scholarships and research; popularization of Germanness in Ukraine and Ukrainian achievements in Federal Republic of Germany.
«Today we open essential and ambitious project. Certainly, academic exchange between two countries will start from exchange of universities and civil society organisations. I hope that in Ukraine this center will become the ground for interaction of science and business, I hope that scientific research will get the chance to commercialize and students will have the motivation for further professional development. In return, European business receives an opportunity to win best minds that has always distinguished Kharkiv», - Tatiana Gavrish, honorary consul emphasized.
Dmitriy Kol’chik noted that this institution will be actively engaged with academic and scientific cooperation between universities of Kharkiv and Germany.