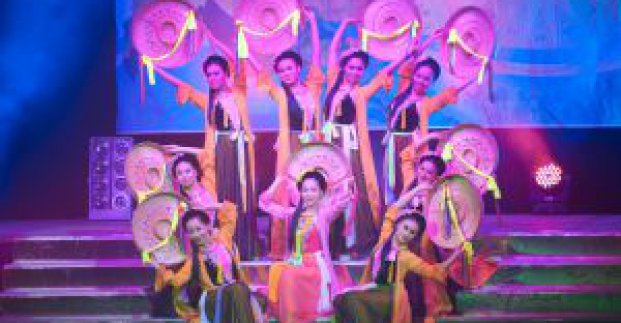 Gala concert of Vietnamese masters of ART, photo exhibitions and exposition of Vietnamese ornamental art have passed on the 17th of November in Kharkiv national opera and ballet theatre named by M.V. Lysenko.
“We have chosen artistic troops properly to demonstrate our culture to Ukrainian viewers. We worked hard when preparing the concert to make kharkovites feel our customs and cultural values”, - the deputy of Minister of culture, sports and tourism of Vietnam Social Republic told.
The deputy of Minister noticed that a lot of Vietnam citizens had studied in higher educational institutions both in Soviet Union and independent Ukraine. According to his words, that was the exact reason of having a lot of in common with Ukrainian and Vietnamese culture.
“I am sure that relations between Vietnam and Ukraine are developing and becoming stronger. Cultural cooperation is a step to economical cooperation”, - the deputy of the Minister of culture, sports and tourism admitted.
The deputy of the mayor of Kharkiv for issues of development and municipal maintenance Igor Terekhov, the deputy of the mayor of Kharkiv for issues of family, youth, sports and preparing for EURO-2012 Alexander Popov and the main architect of Kharkiv Sergey Chechelnitsky were present at the events within the Days of Vietnamese culture in Ukraine.
The regional power was presented by the deputy of the head of Kharkiv regional state administration Eugene Savin and the chief of Culture and Tourism Department of KRSA Dmitry Kusnetsov.
Besides that employees of diplomatic representatives and Extraodinary and Plenipotentiary Ambassador of Vietnam Social Republic Kho Dack Ming Nguet arrived to the concert..
Guests of Vietnam sang and played Vietnamese folk instruments, a circus performance was presented. Kharkovites were surprised and pleased by Ukrainian folk dances performed.

Information. The Days of Vietnamese culture in Ukraine are passing in Kiev, Kharkiv and Odessa from the 14th to the 19th of November with a help of Ministry of Culture of Ukraine, Minister of culture, sports and tourism of Vietnam Social Republic, the State agency of culture promotion of Ukraine.