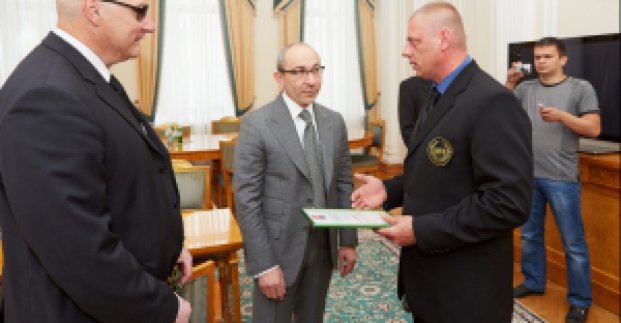 Kharkiv mayor Gennadiy Kernes met with the headship of European Bodybuilding and Fitness Championship organising committee today, May 31.
The president of the World Federation of Fitness and Bodybuilding World Federation WFF-WBBF (Latvia) Edmundas Daubaras thanked Gennadiy Kernes for holding the championship at high level.
Besides, the official representative of the organization in Slovakia Lubomir Martinka presented the mayor with a certificate of gratitude from  the Slovak government. "The deputy prime-minister personally thanks you for the courage of holding such a big team of member countries in your city," - Lubomir Martinka  marked.
Edmundas Daubaras told that Slovakia annually receives World Bodybuilding and Fitness Championships in recent years, and partially sponsor it. Now the sides have an intention to discuss the possibility of carrying the World championship in Kharkov.